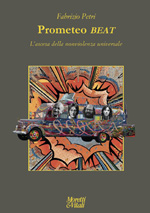 A new perspective on Nonviolence and on the role that it has played in the rise of the network society. This is the essence of the path conceived by Petri in this amazing historical novel set in the years between the early sixties and the late eighties of the last century.

A portrait of the countercultural movements from the Beat Generation and the Psychedelic Revolution up to the Punk and Cyberpunk. The novel is divided in two parts, Dharma Road and Devi Cyberpunk, and the main characters are in the former the poet Allen Ginsberg and in the latter the film director Derek Jarman; the novel is set between the Western world and India, with a global approach that looks at Nonviolence as a new means of interconnection.

An amazing story, full of adventure and turning points, brought alive by several protagonists of that period, from Jack Kerouac to John Lennon, from Willian Borroughs to Timothy Leary, from the Indian bandit Phoolan Devi to Patty Smith and many others, that lead the reader to the very dawn of the web.

The title of Fabrizio Petri’s essay is " Jung , Hillam and the Eastern World today . Interculturalism and Ecology in Net Society " . 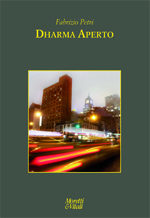 Open Dharma is a detailed essay that, though following the ideal path began with Open Karma

(Moretti & Vitali, 2012), is developed in a very different and original way. The link is guaranteed by the narration itself. As Open Karma begins and ends at the Non-Catholic Cemetery in Rome, Open Dharma begins and ends in the eternal city, this time in the Church of Santo Stefano Rotondo al Celio (St. Stephen’s Rotunda at the Coelian). The author discovers that the Hispano- American pragmatist philosopher George Santayana lived till his death in 1952 in a convent next to the no longer existing church now part of a hospital. If on one hand, the leitmotiv of open Karma was the Beat Generation, which Gregory Corso, now buried in the Non-Catholic Cemetery in Rome at the foot of the graveof Shelley, belonged to, the source of inspiration of Open Dharma are the Pragmatist American philosophers, William James, John Dewey and Santayana himself.

Open Dharma is focused on a wide scale reflection, firmly anchored to the border between East and West. Nonviolence is a life-giving element of contemporary thought in three main aspects , which are the three souls embedded in the work: the fight against suffering, the expansion of the sphere of freedom and the strengthening of tolerance. These are aspects which are essential in the perspective of the creation of an Open Society, in the sense that the philosopher Karl Popper gave to this concept (The Open Society and Its Enemies, 1945). This main theoretical aspect is the second important link between Open Dharma and Open Karma - echoed by the two titles- along with their narrative structures. 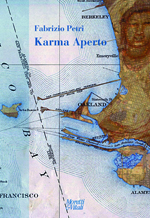 Open Karma is an essay dedicated to the structured historical evaluation of the role that nonviolence, Gandhi’s universally guiding principle,has played (and continues to play) in some of the main trends of contemporary societies, first of which their nature of being network rooted societies, according to the definition developed by the sociologist Manuel Castells. The role played by the American Counterculture, marked from its beginning by the Beat Generation right up to the Hippy and to the Underground phases, is one of the focal points of the theme.

The analysis is carried out using an approach of cross-cultural shared memory, in the unveiling of the reciprocal influences between East and West which brought to nonviolence as a socio- political aspect and to the unfolding of its effects in contemporary global terms.

Focus is put on the endogenous factors of Nonviolence, invigorating expression of the human soul, according to a valid interpretation supported by Petri, of the psychological theories of C. G. Jung.

The Swiss psychologist, founder of Analytical Psychology and clearly influenced by Eastern Thought, allows his theories of the unconscious to become receptive to a systematic application of the traditional view of Nonviolence, that started to emerge in India thousands of years ago, mainly due to the Jain religion.